The Brantford Cyclepath is a family owned and operated bicycle shop in Brantford Ontario. We started in 1980 in the basement of the family home in Paris as "Richard's Bicycle Repair". We eventually decided to expand and we opened our first bicycle shop called "The Bikeway" in Paris in 1991.

In spring 1996 it was time to relocate to Brantford under the Cyclepath banner and became "The Brantford Cyclepath". Our business has grown steadily over the years to become a major destination for cyclists and families in the Brantford, Paris, Simcoe, Waterford, Port Dover, Delhi and surrounding areas. We carry just about every kind of bike imaginable. Mountain Bikes, Fat Bikes, Dirt Jumpers, BMX, Children's, Hybrids, Comfort Bikes, Road Racing, Trail-a-Bikes, Child Trailers and E-Bikes. We also sell and service bicycles for special needs. 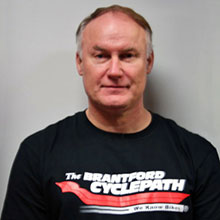 Julian has been riding bicycles since the age of seven. He has an enthusiasm for any and all forms of bikes and has recently made a return to full time bicycle commuting. Julian became involved with BMX riding during the late 1970's and became fully committed to the sport during the BMX explosion of the 1980's, where he found himself working full time in a BMX shop in Edmonton Alberta. He has ridden freestyle and skate park BMX from the early days of the sport and has an extensive knowledge of the history of BMX. Julian then became an early adopter of mountain biking as the fledgling sport was just beginning. He was one of a small handful of local Edmonton riders to first own one of these tough looking bikes and fondly remembers the weekly trials and off-road group sessions of those formative years. He has ridden mountain bikes, both geared and single speed, ever since. He has owned and ridden nearly every form of bike including road, touring, duathlon, cyclo-cross, BMX, trials, mountain bikes and tandems. If you can pedal it, he is into it.

Julian has been a valuable member of The Brantford Cyclepath team since 2003. In 2014 he completed the SBCU Bicycle Shop Management course. 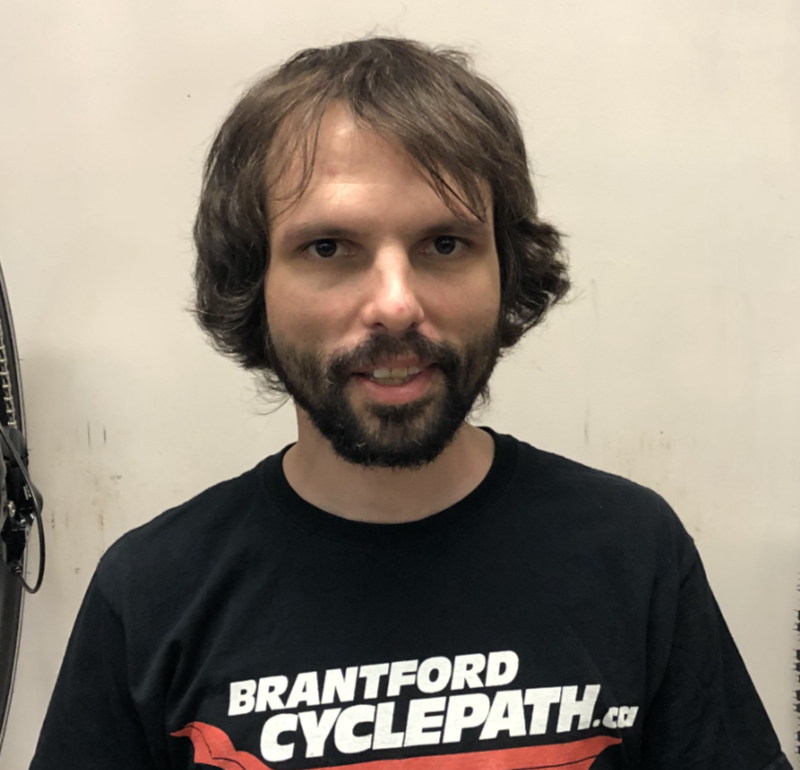 Brent is our lead mechanic. He has had a passion for bikes since he was 8. As a teenager he could be found rescuing bikes from the dump and fixing them up for neighbourhood kids. He started off riding dirt jumpers, moved into 4-cross and dual slalom downhill racing. He has now worked his way into mountain and road bikes.

Brent has been with us since 2014. He has worked to achieve his Shimano Technology Education Certification program, specializing in Pedals, Wheels, Hydraulic Disc Brakes and Shimano Di2 Electronic shifting. He has also achieved his Park Tools Course Certification and the SRAM / Rockshox tech program. 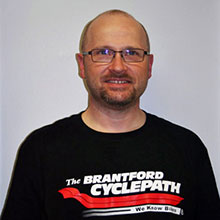 Stuart is the 3rd generation Querney with a passion for cycling. He started touring at 6 years old with the family and hasn't stopped. He has cycled extensively throughout Ontario and most of Northeastern USA. As a teenager in the 1980's, he started mountain biking to "Get off the road on hot summer days" and has been hooked ever since. In 1994 Stuart started racing mountain bikes and entered almost every kind of cross-country mountain bike event, including more than a dozen 24 hour team endurance races, one of which was solo. Stuart has been involved extensively with recreational cycling since he was a teenager. He ran the Brantford Cyclepath Bicycle Club from 1996 to 2005 and spearheaded The 8 Hours Multiple Sclerosis MTB Team Relay in Paris from 2000 to 2004, raising funds for the charity.

Stuart started spinning wrenches in the family basement bicycle repair shop at the age of 9. By 14 he was building wheels and was working to improve his mechanical skills. Making all things two wheeled work better has been a lifelong pursuit. When the family's first bike shop "The Bikeway" opened in 1991, he worked part-time, then full-time in 1993 as the full time mechanic. In 1996, the shop moved to Brantford as The Brantford Cyclepath where Stuart took on the helm of the service department.

In 2009, Richard retired and Stuart took over the company. He completed the SBCU Bicycle Shop Management courses in 2013 and 2017.

In 2010, Stuart started Body Geometry Fit, successfully completing Level 1 and 2 courses. In 2014 he successfully achieved Body Geometry FIT Certification under the direction of Dr. Andy Pruitt. In 2017 he moved into Retul FIT, using Vantage software and equipment, which digitized the entire process. In 2022, he upgraded to Retul Premium FIT. 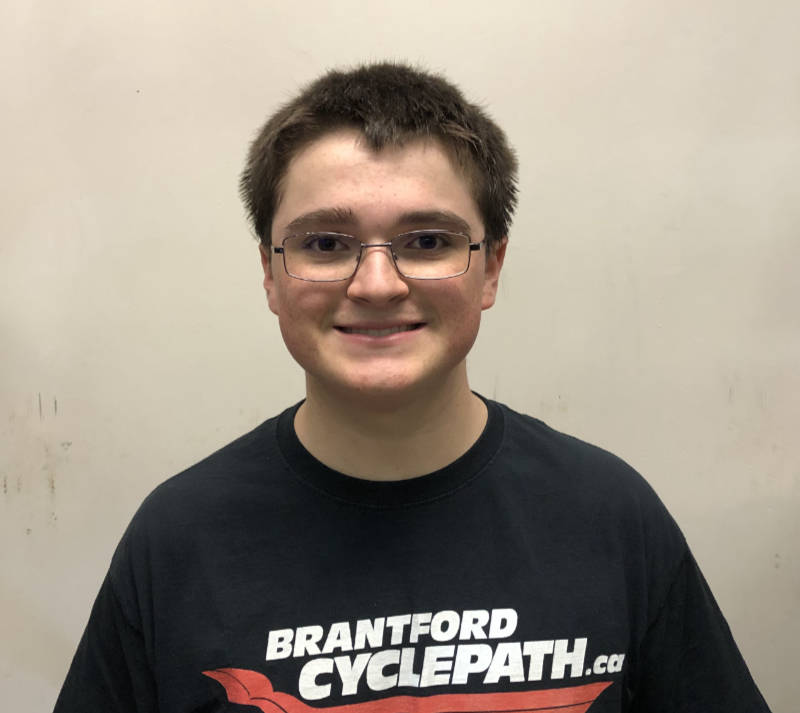 The 4th Generation Querney-passionate-cyclist. Since Harrison Querney had the training wheels on his bike removed at the age of 5, he has never stopped cycling! From a young age Harrison has ridden the Paris to Ancaster Bike Race on his trail-a-bike behind the wheel of his dad, and also independently on his own bicycle. Harrison’s interest in the family business all started from when he bought a new mountain bike and learned how to assemble the bike. He first started helping in the business by doing the stores metal recycling and occasional cleaning in the store. Harrison was our “Hospitality” at the Cyclepath for the 25 anniversary celebration in 2016. As a high-school student, Harrison commutes whenever possible and helped out at the shop. Harrison became a part time employee at the age of 16, working in both Sales and Service departments and has been eager to gain the knowledge required to assist customers. ?
Harrison has participated in multiple rides including; Tour De Norfolk, Tour De Grand, Brant Waterways Ride, and MS Bike Tours, where he would fundraise to conquer Multiple Sclerosis.  In the same year Harrison helped out at the “Bikes Not Bullies” bicycle event which took place in 2016 to stand up against bullying. In present time Harrison mainly rides road and rail-trail, and is apart of the Brant Cycling Club. 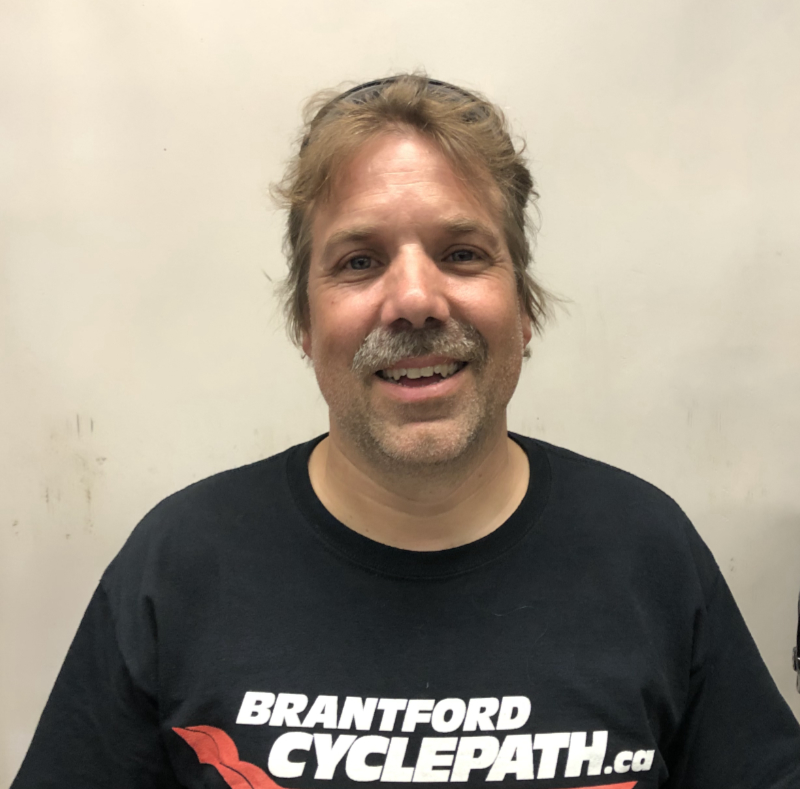 It's Phill. He's been riding in MTB racing for 15 years. He has participated in many races varrying from 60k race's to 8hr
and of course 24hr racing. 2 of which were solo. He has had some success in getting on the podium from 3rd in 8 hr solo
to a 1st and second in 24hr team racing. He now has incorporated gravel riding into his routine.

He encourages everybody to get out and ride. He has assisted many children getting out of training wheels with a few easy
tips. Hope to see you soon. Phill's daughter was the youngest participant in the P2A when she completed the race at age 3 on
a trail a bike. 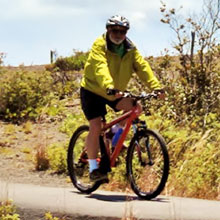 Richard (Gone riding…. er, um… retired) is our company founder. He is the 2nd generation of his family to have a passionate interest in bicycles. His father was a track cyclist in London England in the 1930's. Richard has been riding bikes for nearly 60 years and in the early years was a avid club cyclist and member of the South Eastern Road Club participating hill climbing, time trials, and touring. In those days a fixed wheel bike was the norm. He has toured extensively through England, Germany, Spain and Ireland to name a few locations as well as most of the UK. He came to Canada in 1969 and was a founding member of the Ontario Cycling Association in 1973 and a board member in 1975/76. Richard has been a major contributor to recreational cycling in Ontario and was a founding member of Great Canadian Bicycle Tours. In the ensuing years, cycle touring has been his main interest covering many parts of North America, most recently South Dakota, Colorado, New York State, Virginia and Hawaii, as well as every province of Canada.

We’re dedicated to helping you find the perfect bicycle for your riding style. We carry a wide selection of bikes and cycling gear for beginners and experts alike. We are here to help you select the equipment that best meets your needs as a cyclist.

Our friendly staff all ride bikes and are professionally trained. In sales and service, we’re committed to providing you with an exceptional shopping experience and work hard towards creating a very welcoming atmosphere. We Know Bikes

Our qualified professional mechanics service all makes and models of bicycles. Visit us for a free assessment estimate and count on us for quick turnaround times and quality bicycle repairs.

Proper bicycle fit is essential to enjoying the ride. Our certified fit specialist learns about you, evaluate you in the riding position, and configure your bike to meet your cycling goals.