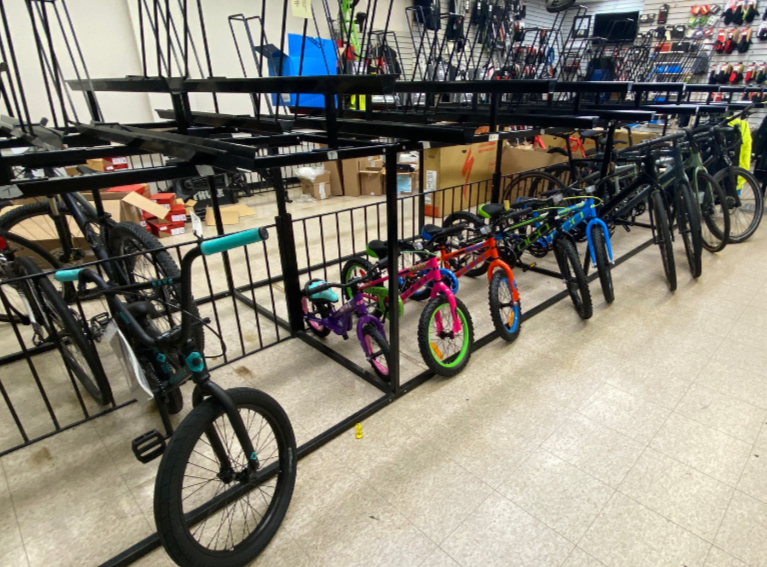 Bicycles in a Pandemic

As we’ve all had to social distance in response to COVID-19 protocols, there has been an increased demand for bikes around the world. Not only are bikes a great safe option for commuters, but a great way to stay physically and mentally healthy while staying safe and distanced from others.

This increased demand and momentary shutdown of manufacturing caused a shortage of bikes, (Mostly  under $2000), parts, tires and tubes, clothing and equipment. This means a delay in getting new bikes in our store and delays in repairs.

We are not immune to the shortage.  As you may have noticed, we have limited availability of bikes in all categories. We have great relationships with our suppliers and and are working diligently to get products into our store. We have a WAIT LIST VOUCHER program. This way you can reserve your bike now.  When it comes in, yours gets priority. We have hundreds of bikes ordered from our suppliers.

- January 2020. China closed down every factory for three weeks at the start of the pandemic during the Chinese New Year.

- March 2020. All the major bicycle suppliers were projecting COVID-19 lock-downs would create a serious downwards purchasing trend, (This happened in many industries - not just bicycles). They all moved quickly to shrink their inventory and lay-off employees to position themselves to weather the storm of uncertainty.

- April 2020. Everybody was wrong... The exact opposite happened. Sales were ticking up across the board, everywhere on earth! By the end of April, demand for bikes that retail for under $2,000 CAD more than doubled. As low-priced models began to sell out, every other bike category and price-point followed suit. Manufacturers came to realize they were going to need a lot more bikes!

- At the outset of pandemic, most government jurisdictions deemed bicycle retailers essential businesses because of transportation concerns.

- There is a perfect storm of reasons why bikes were in such demand. No one wants to take public transit. With gyms and sports off limits, anyone looking to get a dose of cardio needed a socially distant way to get their fix. Parents were eager to push their kids off their screens and out of the house. For some, riding a bike is just fun and nostalgic. The pandemic forcing us to rediscover ways to stay sane. Cycling is the perfect sport for COVID-19.

- Bike sales in April were up by 75% over the previous year. Sales of bikes under $300 grew more than 200% and front-suspension mountain bikes were up 150%. Kids’ bikes spiked 107%. May and June exploded more than April did. By year's end, with decimated inventory, year-over-year increase was 130%

- All the world’s largest bike manufacturers have most of their production facilities in China, Taiwan, Vietnam and Cambodia. Many parts come from Indonesia, Malaysia and the Philippines. All of these countries have labor shortages. Taiwan’s factories depend on guest workers from Thailand, Vietnam, Indonesia, and the Philippines. Coronavirus restrictions curtailed labour migration, limiting factories’ abilities to increase production. Increased labour costs are hitting the factories which are being passed on to bike companies.

- Suppliers of dealer-quality bikes depend on Taiwan for components, frame making, and bike assembly. Bikes with frames made in Vietnam, China and Cambodia rely on Taiwanese components.

- Since December 2020, China has been paying a premium to shipping companies to have sea-containers sent back to China from all over the world. Most of these are going there empty. This move by China has effectively shut-out many other countries from being able to get their goods moved. There are reports of 1/3 to 2/5 of the needed containers by these countries, stalling everything in every supply chain.

- Moving products around has become slower and more expensive. Contract ocean freight costs are generally set for a one-year period. These are up 40%. Spot container rates, which vary constantly depending on the availability of containers and demand, are about 2 ½ times the contract rate. The ocean freight cost increases alone can add $15 to $25 per bike compared to a year ago. Even at the high rates, it’s still difficult to arrange for enough containers. E-Bikes require a more rare, and more expensive special container due to batteries. To put this in perspective, an average 40-foot sea-container (sea-can) can fit 235 to 275 adult bicycles.

- The old rule of thumb is that a $1 increase in cost for an importer results in a $3 increase on the sales floor. Freight cost increase alone might add $95 to a bike’s price, bearable on a high-end bike, but a significant increase on the cost of a sub-$2,000 model.

- Domestic freight costs are also on the increase making it especially costly to ship large boxes like bikes. Example: In June 2020, UPS added a $31USD surcharge on large packages like bikes.

- All major bike brands increased retail bike prices across the board to cover the significant increased costs.

- Demand since the beginning of 2020 has been the highest in decades. Despite manufacturers significantly ramping up production, the industry estimates the pandemic-fueled bike and part shortage will continue into 2022 and—based on what brands are quietly telling us—may last until 2023.

- Accelerating production of bikes is tricky. The supply chain is complex. A single bicycle is composed of a lot of parts — wheels, handlebars, shifters, brakes, grips, pedals, cables, housings, cranks, tires, wheels and many more — from as many as 75 different sources. Once manufactured, those components need to be sent to a frame manufacturer for final assembly. The bicycles are then boxed up, (A standard bike box is 43" x 32" x 11",) and shipped to company warehouses around the world, and finally on to retailers. Under the best conditions, this process takes an average of 120 days. Time-lines have increased to 240 - 540 days.

- The bike industry was not running with lots of spare manufacturing capacity prior to COVID. The industry can't simply double its capacity to meet the increased demand, then later, as demand drops, when everyone’s got a bike and suddenly you’re left with a factory that’s too big and machinery or staff that aren’t being used.

- The last time the bike industry saw a spike in demand was in the mid-'70's during the fuel crisis.

- Parts, due to the demand for repairs, sold out. Many items that were always easy to source like cables, chains, tires and tubes diappeared. New inventory of these items are needed for new bikes, further complicating getting components to repair bikes. Unlike most years, no supplier has anything left over and need to re-build their inventories. Bike shops everywhere are in the same predicament, all trying to outmanouver each other for stock.

- Some suppliers were taking orders for 2022 bikes in October 2020. Some 2023 product lineups will be announced to dealers around July 2021. The bike industry usually lets dealers book their bikes in July/August for the next calendar year. Generally, bicycle retailers cannot predict that far into the future.

- March 2021. Shimano, the largest parts supplier to the entire bike industry, from what we understand, is now over 600 days for supplying bike manufacturers with parts. Other component manufacturers are in similar situations.

THIS IS WHAT INFORMATION WE HAVE BEEN ABLE TO COLLECT. THIS IS AN ON-GOING STORY.

What Happened at The Brantford Cyclepath Through COVID??

- March 18 2020. We closed the doors to walk-in customer traffic a week before the mandated shut-down. All the market indicators showed that we were in for difficult times. We had received a lot of inventory and were concerned we would have no-one to sell it to!  Little did we think, just like the big guns in the bike industry, that we would see the pendulum swing the other way!  BOOM!

- March 24 2020. We had been instructed by the govenment the previous day that mandatory shut-downs were coming, and the exemptions would be announced mid-day. We were busy closing down the operation... and then the announcement came that bike shops were considered essential services... then we had to swing 180 degrees to figure out what that would mean for our shop.

- We quickly changed our business model to rely on our web-store.

- April happened.... We went from slow-ish sales at the beginning for April, to all out crazy by the end. It didn't let up at all until late June. We had online orders from all over Ontario, up to 6 hours away, picking up anything we had with two wheels. Online orders for parts and accessories were coming in from all over the country.

- It looked like a bomb went off in the shop. We were working 8-16 hour days, trying to keep up while the doors were closed and locked.

- The phone would not stop ringing! We changed all our procedures to be as efficient as possible, using text instead of phone calls etc. It was weird! There was no way to divert any more resources to communicating with customers. We didn't have the resources to answer the phone along with everything in front of us. We had to utilize our texting software in a way it was never designed, streamlining communications into some sort of system we could keep track of and stay on top of. (We've had to continue this ever since.)

- Early on, we split our staff up into two pods to keep each other safe from possible COVID-19 transmission, further impacting our ability to move through sales and repairs efficiently. It's impossible to have more than one mechanic wrenching at the same time in a service area 10' x 10'  when you have to keep 6' apart! By Mid-late May we were able to re-combine our staff.

- People were bringing in 30-year-old bikes and trying to get us to repair them. Sometimes these were $200 bikes that need $400 of work. Normally, we would strongly suggest replacing a bike like that but we had nothing to show them. The sales floor transformed into a bicycle triage center of old bikes needing attention.

- We usually purchase bike and repair inventory to support us through the end of July each year and re-stock as needed. Normally, there is always a supplier with something for us. in 2020, everything was gone by mid-June. Whatever scraps were left was gone by mid-July. No supplier had anything left to replenish our inventory with! We couldn't even buy a tube from anyone!  It was ALL GONE!  As of mid-March 2021, this has changed little.

- We usually receive the lion's share of the next season's bike inventory over the fall/winter and spend this same time building the back-stock. For 2021, almost every bike is sold before it arrives. We have to build everything as it arrives, whilst doing repairs etc.  It's a lot!

MORE AS WE HAVE TIME TO ADD TO THIS CONTINUING STORY.